Over a year has passed since the second-generation Apple TV 4K launched in May 2021, and rumors have started to surface about new features planned for the next model and beyond, including a faster chip, increased RAM, a new Siri Remote, and more. 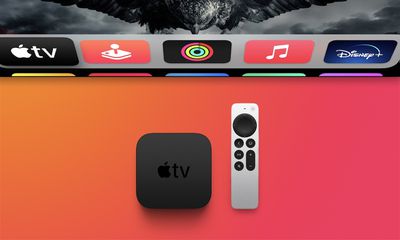 We've recapped all of the Apple TV rumors that have been shared below, as well as features coming in the tvOS 16 software update later this year.

A new Apple TV codenamed "J255" is in development with an A14 chip and 4GB of RAM, according to Bloomberg's Mark Gurman. These upgrades would result in improved performance, which could be beneficial for gaming on the device.

Apple plans to launch a lower-priced Apple TV in the second half of 2022, according to analyst Ming-Chi Kuo. It's unclear if this Apple TV would have the A14 chip and 4GB of RAM that Gurman reported, or if it would be an entirely different model.

The current Apple TV 4K starts at $179 with 32GB of storage, while the Apple TV HD remains available for $149. By comparison, there are many streaming sticks from brands like Chromecast and Roku available for under $50 to $100.

In the iOS 16 beta, there are code-level references to what appears to be a new and unreleased version of the Siri Remote for the Apple TV.

As spotted by @aaronp613, there are strings for "SiriRemote4" and "WirelessRemoteFirmware.4" that do not correspond with any existing Siri Remote.

Aaron said the original Siri Remote is identified as "SiriRemote," while a revised version of that remote with a white circle around the "Menu" button is "SiriRemote2," and the silver Siri Remote released last year is "SiriRemote3." This leads to the possibility that "SiriRemote4" is an upcoming remote for a new or existing Apple TV.

No additional details about "SiriRemote4" are mentioned in the code, so nothing is known about the remote's potential design or features at this time. The code findings also do not guarantee that Apple will move forward with releasing a new remote.

Gurman believes that Apple will eventually release a device that combines an Apple TV, HomePod, and FaceTime camera, but details remain slim. Gurman said the combined device "will probably be at the center of Apple's approach" in the home.

tvOS 16 will be released for the Apple TV HD and newer later this year. The update is currently in beta for developers, with a public beta to follow in July.

An overview of new tvOS 16 features for the Apple TV:

dlewis23
I enjoy the current Siri Remote. The only thing I could see them adding is Find My for if you lose it.
Score: 11 Votes (Like | Disagree)

stocklen
you are all talking as if the current model.... only out a year (which in apple terms for Apple TV is practically brand new!) is somehow rubbish.

It isnt. Its great.... I wonder why we need a new version so soon - even the older 4K model released a few years earlier seemed unnecessary to replace last year - but again already?

The AppleTV is the best, and fastest streaming box out there - I struggle to see the pressing need for its replacement just yet.
Score: 9 Votes (Like | Disagree)

inlvnv
will Apple ever include Safari?
Score: 9 Votes (Like | Disagree)

JustinCymbal
Can’t wait to get the new Apple TV for my living room!

MacRumors had an article yesterday that said that Apple is planning to release a new HomePod next year so a new Apple TV would be great to use alongside new HomePods for the stereo pair!
Score: 7 Votes (Like | Disagree)

jaisonline
The AppleTV’s UI & OS quality are awesome. The kids love it. Our first was the 2nd Gen many years ago. Now on the 4K and HD models. If Apple can lower the price point, it will gain market share.
Score: 5 Votes (Like | Disagree)
Read All Comments

Saturday July 16, 2022 6:00 am PDT by MacRumors Staff
If you've been waiting since last month for a chance to try out iOS 16 and all of Apple's other upcoming operating system updates without needing a developer account, now's your chance, as Apple has launched public betas for all of the updates. This week also saw the launch of the redesigned M2 MacBook Air, the official end to the working relationship between Apple and Jony Ive, and a couple ...
Read Full Article • 16 comments

Thursday July 14, 2022 6:08 am PDT by Joe Rossignol
The first embargoed reviews of the new MacBook Air with the M2 chip have now been published. One notable detail confirmed by The Verge is that the $1,199 base model equipped with 256GB of storage has a single NAND chip, which will lead to slower SSD speeds in benchmark testing, but real-world performance may vary. Last month, it was discovered that the 256GB model of the 13-inch MacBook Pro...
Read Full Article • 701 comments

Friday July 15, 2022 2:54 am PDT by Tim Hardwick
Google has officially released ChromeOS Flex, a method of replacing the operating system on older PCs and Macs that essentially turns them into Chromebooks. The idea is that if you have an aging Mac lying around that can't run macOS 12 Monterey, then you can install ChromeOS Flex on it using a bootable USB stick and then try out what Google's cloud-first operating system has to offer....
Read Full Article • 156 comments